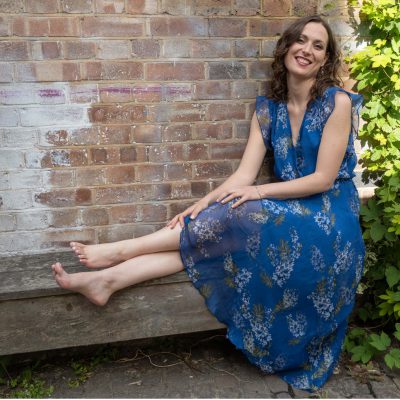 Tonight will be a celebration of Noemi Nuti’s latest album, ‘Venus Eye‘

Noemi Nuti brings her latest 5 star ***** rated album “Venus Eye” for a unique London show with her band to The Hampstead Jazz Club! Expect wide-ranging expressive honesty, vocal effects and acoustic harp playing fused with improvisational elements of modern jazz, rhythms from Brazil all within the canvass of song form.

Best known for her debut Brazilian-influenced album ‘Nice to Meet You,’ that was A Listed on Jazz FM in 2015 as well as being the first release on the Ubuntu Music Record Label, Noemi will transport you far and wide from the comfort of your seat.

Born in New York City, from Italian descent, Noemi’s musical personality fuses Mediterranean and metropolitan sounds. She started her journey at 8 years old studying Folk harp in Italy to then receive a BA in Music from Brunel University on Classical harp. Her fascination with jazz started in 2008 when she joined the Tomorrow’s Warriors Jazz Alive Project with ESKA, Soweto Kinch, Orphy Robinson as leaders.

In 2012, she graduated from Trinity College of Music, London with a Masters in Jazz and has since gone on to tour in Brazil in 2013 as the lead singer of Barak Schmool’s British samba band Rhythms of the City.

She was also a member of Pete Churchill’s London Vocal Project (performing with Norma Winstone and Kenny Wheeler) and a Worshipful Company of Musicians Young Jazz Musician of the Year finalist in 2013.

Her debut album ‘Nice to Meet You‘ was produced and featured trumpet sensation Quentin Collins and was the first release on the up-and-coming Ubuntu Music Label. It received wide critical acclaim and six out of eleven tracks have been featured on various radio shows, two of which on the highest possible rotation on Jazz FM.

She has toured around the UK with her own band during 2015 and 2016 supporting Brazilian legend Marcos Valle at Islington Assembly Hall and headlining Ipswich Jazz Festival whilst establishing herself on the London music scene.

She tours with Andrew McCormack’s Graviton internationally as lead singer, playing in prestigious venues such as Ronnie Scott’s, the 606 Jazz Club as well as Europe.

“A true star in the making. Noemi has grace, style and elegance, but most important of all her voice illuminates any room. A must to see.” – Alex Lloyd, Jazz FM

“If you have not heard Noemi sing, think – extremely talented, innovative, versatile and passionate.” –Fernando Rose, 5***** Star Review on Kind of Jazz