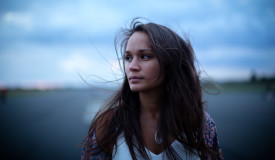 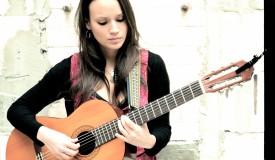 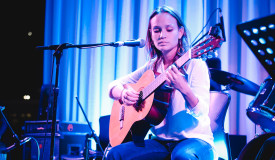 The duo of Beto Caletti and Mishka Adams has its musical roots firmly planted in South America’s Afro-Latin rhythmic traditions. Their sound stretches from the African influenced Baião of northeastern Brazil, south through the jazzy harmonies of samba and bossa nova from Rio, down into the earthy beats of Uruguayan candombe, and arriving finally at the dancing rhythms of the chacarera and milonga of Argentina.

Their compositions emerge from this melting pot of rhythms, taking the listener on a journey in four diverse languages – Spanish, Portuguese, English, and Tagalog (Filipino), Mishka’s mother tongue. The combination of guitar, handheld percussion and intricate vocal harmonies bring an intimate experience of storytelling, tradition, innovation and love across continents.

Following a successful launch of their album “Puentes Invisibles” at Pizza Express Jazz Club in London and a European tour in 2018 they are now on tour in Argentina, and preparing for tours in The Philippines, Japan and Europe in the spring and summer of 2019. As well as performing, they are also giving workshops on different musical styles from South America.

Beto, from Argentina, has performed on stages all over the world, such as the Montreux Jazz Festival and festivals in Japan, working with artists such as Ivan Lins and Roberto Menescal. He is a renowned composer, performer and educator of South American music, having written three books on the subject and given workshops all over South America and Japan.

Mishka, from Manila, Philippines made a name for herself on the Jazz and Brazilian music scenes in both London and her hometown of Manila, as well as touring worldwide. To date they have released multiple albums on Candid Records, Fonarte and Inpartmaint (JP). They divide their time between Buenos Aires and London.

“She is a songwriter’s dream – a great understanding of text, and, quite simply, one of the most beautiful voices I’ve ever heard” – Pete Churchill, Professor of Jazz at the Royal Academy of Music, London

“I´ve been listening to Beto Caletti´s music for a while and I´ve become a fan of his. He is an extraordinary and highly talented musician.When he walks the path of his Brazilian influences he sounds Brazilian and even better than many Brazilian musicians of great fame here in Brazil.”- Ivan Lins, multi Grammy Award-winning musician