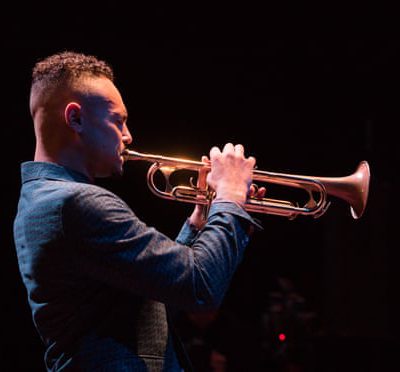 Making his debut at the Hampstead Jazz Club – Trumpeter Jay Phelps is at the forefront of the young and creative generation of Jazz musicians in the UK, with an instantly recognizable warm and projecting tone. A Vancouver-born Canadian, Jay was tutored by the city’s top Jazz and classical trumpeters and distinguished himself early on as the youngest band-leader in the Vancouver International Jazz Festival’s history.

Traveling the world for two years of inspiration and adventure, trumpeter and latterly vocalist jay phelps has distilled his many exotic experiences into the creation of Free as The Birds – released spring 2018 on Ropeadope Records. Melding influences from his Canadian roots, his adopted home town of london; the hothouse of New york where he was warmly welcomed; to Barcelona with it’s epic architecture; Thailand’s spicy sunshine; and the intensity of living the Brazilian reality. phelps – who burst onto the international jazz scene as co-founder of the award-winning super group empirical – has penned an album that caters to the listeners across the board. This 90min album covers a wide spectrum of musical styles and rhythms, but also carries a unified theme. As well as featuring Phelps’ current touring band, this album also features some of the worlds top musicians from New york and Brazil.

“Fashioning a scintillating tone that sounds like a mixture of Freddie Hubbard, Booker Little and Terence Blanchard, Phelps cites his experience with Andrew Hill’s Anglo-American Jazz Orchestra as a significant guidepost for some of his compositions.”
John Murph, JazzTimes

“Trumpeter Jay Phelps is an acrobatic solo displayer, cutting and fiery, and certainly not afraid of extended bouts of self-expression.”
Martin Longley, BBC