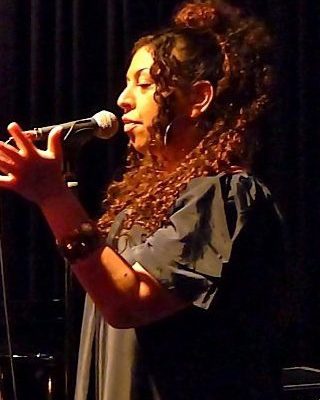 Heidi Vogel is one of the UK’s finest and most innovative vocalists. She has vast experience of performing a range of styles that demonstrates her eclectic approach to music. Heidi makes her debut at HJC on Thurs 25th April and will be performing a mixture of Jazz, Soul, Latin and reggae themes supported by guitarist and MD Ciyo Brown, pianist/keyboardist Riccardo Reid and double bassist Neville Malcolm.

Heidi has been a vocalist and touring with The Cinematic Orchestra since 2006 and also appears on The Cinematic Orchestra’s latest album,“Live at the Royal Albert Hall” release date March 2019. This velvet-toned singer has a transporting tone, which lends itself to an extensive genre of songs. Heidi’s vast tonal range and ability, is the reason for her popularity as a chosen vocalist to collaborate on so many diverse live music projects and as a recording artist.

Other prestigious performances include featuring at; The Sydney Opera House and with The Krakow Symphony Orchestra and London Metropole Orchestra.

Heidi’s long list of noteworthy performances are too many to mention but some of the highlights include opening for Erykah Badu in Dubai, performing at Montreal Jazz festival for Quincy Jones and appearing live on The Jimmy Kimmel Show on ABC with the band.

Appearances at all the major Music Festivals around the Globe has seen Heidi make a true impact as an incredible force of voice and as a great lady of song, some of these include; The Cape Town Jazz Festival, Coachella, Sonar Tokyo, Fuji Rock Japan, Bluenote Jazz Festival, New York Central Park Summer Festival, Montreal Jazz Festival, and New York Film Festival.

Heidi’s debut album “Turn up the Quiet”, has received rave reviews from jazz wise magazine, jazz times magazine and received support from Jamie Cullum, Benji B, Osunlade to name a few. The album presents Heidi performing Brazilian Bossa nova and jazz classics. A contrast to her recordings on house classics, as well as broken beat, hip hop and drum and bass.

“She’s got an extraordinary voice…. an incredible range and such a texture…. keep an eye out for Heidi Vogel.” – Jamie Callum BBC Radio 2

“Surely one of the great jazz voices of modern times.”– VAMOS-LONDON