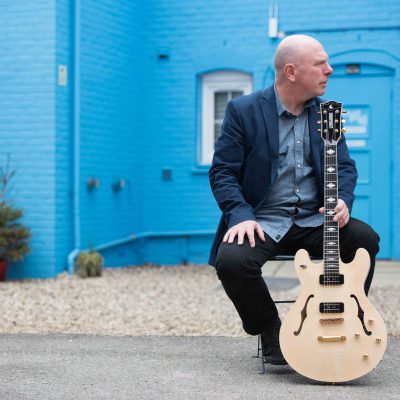 Award-winning London-based Australian guitarist/composer Carl Orr is bringing his unique and broad-ranging jazz debut to The Hampstead Jazz Club on September 5th. A professional musician since 1980, Carl is known for his versatility and has performed in many different musical contexts as is evident from his impressive resume.

Carl has performed and recorded with some of the finest musicians and performers in the world including Sting, Billy Cobham, George Duke, Eric Bibb, Ernie Watts, Randy Brecker, Bennie Maupin, Don Grusin and The Philharmonia Orchestra.

He was the guitarist on the 2018 UK tour of Sting’s “The Last Ship” and has played in the pit orchestras of “Thriller Live” and “Priscilla, Queen of The Desert” in London’s West End.

A prolific composer, Berklee-educated Carl has lead and recorded nine albums and also featured on four albums by drum innovator Billy Cobham(ex-Miles Davis,John McLaughlin). In 2017 he was inducted into the South Australian Music Hall Of Fame alongside entrepreneur Robert Stigwood and guitarist to the stars, Orianthi.

Carl has performed at Ronnie Scott’s Jazz Club over 300, times, where he has jammed onstage with the likes of Eric Krasno, Mike Stern, Bill Summers and Marcus Miller. He has also played at many of the world’s leading jazz festivals including Montreux, North Sea, Kuala Lumpur and Vittoria/ Gasteiz.

Carl is joined by award-winning & 2018 nominated British jazz vocalist, lyricist and producer, Georgia Mancio. Georgia is one of Europe’s most respected, adventurous and multi-faceted new artists. Her multi-lingual music references classic jazz and Latin alongside her own astonishing songwriting, always stamped with an unfailing emotional integrity.

Bassist ‘Level’ Neville Malcolm is a familiar face in the London scene and has worked with countless top artists including US3, Tom Jones, Eric Bibb and China Moses. Drummer Dave Ohm is one of London’s finest and most versatile jazz drummers and has worked with Benny Golson, Wessel Anderson, Ian Shaw and Claire Martin.

“Carl Orr is a friend and a great guitarist who played in The Last Ship band on the British tour. Check out his new album ‘Somewhere Else‘”  – Sting (Facebook post May 16th 2019)

“What a joy to be anywhere and listen to guitarist and composer Carl Orr’s latest album, Somewhere Else. I can’t get over how brilliant this recording is… ” – Walter Kolosky(John McLaughlinBiographer)