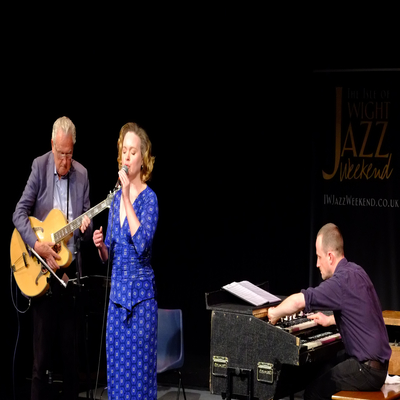 Thrilled to announce the release of my new album “Blue Town” recorded over two days in February 2019 at Ianto Sound studio London, on my own label, featuring multi award-winning guitarist Jim Mullen and the incomparable Ross Stanley on hammond organ. It’s a live in the studio album of first takes. 13 tracks recorded and produced by John Gallen. A selection of bittersweet standards. Lyrics which capture our moods whether reminiscing, daydreaming, hopeful or heartbroken. The combination of these two great musicians gives this selection of songs the textures, rich sounds and musicality I was seeking to bring out the pleasing melancholy in these stories. “Blue Town” was launched at the 606 Jazz Club in London on June 2nd to rave reviews!

Zoe Francis is an emerging talent on the London Jazz Scene, with great taste in both material and musicians, she is a class act.
The subtle way Zoe gets inside a lyric with the great timbre, intonation and diction can leave an audience spellbound. “Blue Town project” showcases some of the best bittersweet songs of the last century including composers, Billy Strayhorn, Duke Ellington, Ennio Morricone, Lionel Bart, Fran Landesman, Johnny Mercer, Burton Lane.
With multi award-winning guitarist Jim Mullen and the incomparable Ross Stanley on Hammond B3 this is a trio not to be missed. This is utter brilliance and a combination of emotive musicianship blending beautiful harmonic layers to create a mesmerising musical experience.

“With positive memories of Zoe Francis‘s Blue Town CD from the summer, I wondered how its predominantly ‘bittersweet’ mood would work in a live performance at Dean Street’s Pizza Express last Sunday. The short answer is ‘just beautifully’, with the balance between Jim Mullen‘s guitar, Ross Stanley‘s C3 Hammond and Ms Francis’s ever stronger and more relaxed voice absolutely perfect, assisted in no small way by the absence of drums” – London Jazz News

Jim Mullen, acclaimed guitarist is part of the elite list of world renowned first class musicians. His accolades and appearances over decades is too long to list and include featuring on the first three albums and touring with the “Average White Band”.

Jim’s collaborative work with the best in the industry, led to his acclaim as joint leader of the British jazz funk band ‘Morrissey-Mullen’.

Mullen went on to release three successful solo albums and continues to be a sought after musician both in his own right and through his work with other industry greats which include: Sir Paul McCartney, Claire Martin, Jocelyn Brown.

As part of an All-Star collective of musicians, Mullen recorded alongside special guests Jocelyn Brown, Hamish Stuart and Angelo Starr on the album “All About Music” produced by Sir Paul McCartney.

In 2014, he featured prominently on the Citrus Sun album, ‘People of Tomorrow’, produced by Incognito co-founder, Jean-Paul ‘Bluey’ Maunick.

Celebrating and featuring the brilliance of the Hammond organ in Jazz, Ross’s keyboard skills as a pianist are unparalleled and he continues to make waves in the world of jazz with his crossover and musical artistry as a top musician.