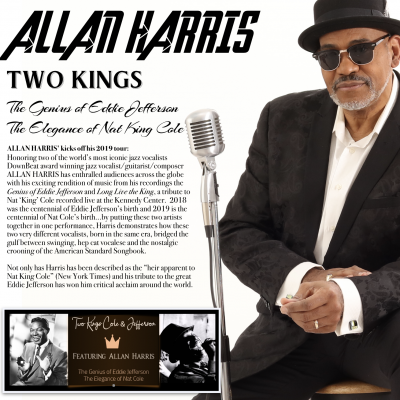 As a child, Harris was raised on a heady diet of classical music and jazz. His mother was a concert pianist, whilst his aunt was a jazz singer who was close friends with Louis Armstrong, Duke Ellington and Sarah Vaughan. Having paid his dues and honed his craft, he was taken under the wing of Tony Bennett, who became his musical mentor.

After winning widespread critical acclaim for a pair of albums celebrating the music of Nat ‘King’ Cole and Eddie Jefferson, Harris and his band have performed A Tale Of Two Kings in some of the world’s most prestigious venues. We are delighted that they will be playing two special shows paying homage to these musical giants in the intimate setting of Hampstead Jazz Club.